Twice a year, in January and July, the Tappers-of-Bromley group stage an all-day Open Day. On the Open Day on January 4th???? people signed in and enjoyed seeing two substantial coarse-scale gauge-0 railways. The largest was put on by Adrian Capon using flat-centre-3rdBassett-Lowke track, an array of sidings, buildings and accessories. There was so much to see that the pictures here can say more than words ever can. Please study them. Note the combination of three loops of track for continuous running alongside engine sheds, goods sheds, cattle areas and other scenic accessories. Adrian’s railway was set up with very-early-morning help from Dave Hulme, Graham Lock and Peter O’Kane. It was run largely by Adrian, Paul Dobson and Terry Heaslip. Additionally we had the “small Tappers’ Test Track” (the one with the green wooden frames with three running loops).
Traders comprised Mark Carne, John Davis, Mike Green, Graham Lock, Paul Lumsdon, Bruce Palmer, Gary Steele, Tim Walker and Peter Wray. Peter exhibited some Stronlite material. There was a small bring-and-buy table. Hence, as in previous years, there was a variety of items to purchase from the clearly-quite-expensive-and-new through to “I’d-could-fix-that” material.
The kitchen was run by Bill Bishop, Brian Gasson and Graham Lock. Keith and Robert manned the door and collected the entrance money. I took the photos and compiled material for the report.
At first the heating failed and an army of attendees attempted to fix it (by about lunchtime when a “church authority” had been summoned.).
SEG0G and Tappers, whilst separate organisations, share the Bromley Hall on different days throughout the year. However only Bill Bishop was present on the 4thto represent SEG0G.
Tappers celebrated its 10thyear in 2019 so we have now entered a new decade. The Tappers book celebrating the anniversary has sold 476 copies and is now an expanded 56 pages on its 7thprinting. Copies are still available for the original price of £3 from Steve or Graham (frankhornby07@aol.comor grhmlock@yahoo.co.uk. )
Tappers will continue throughout 2020 with monthly meetings comprising two all-day-ers, four half-day-ers and six evening meetings. Dates are in our book and posted in the diary pages. Do come along for a warm welcome. We shall continue our gauge-1 initiative on the half-day-ers (March, May, September and November). The July full-day meeting will have a Bassett-Lowke/Bing theme. I am told this will have a very special exhibit but Graham is keeping mum about that. Come and find out as I hope to do. 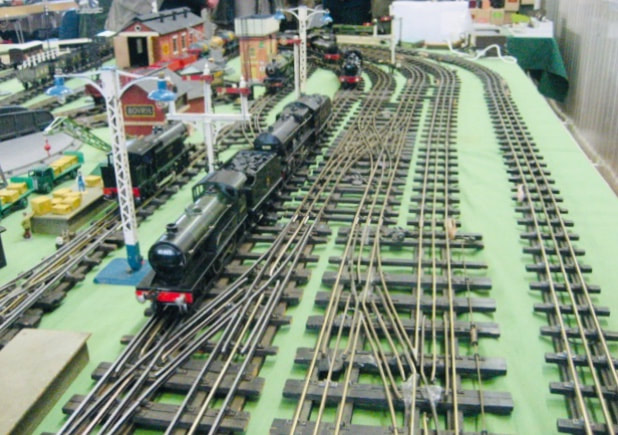 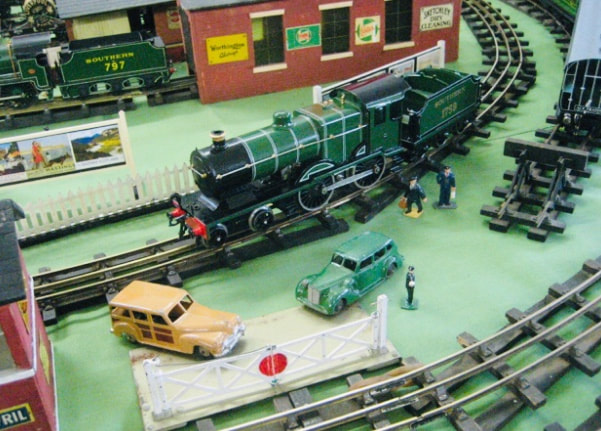 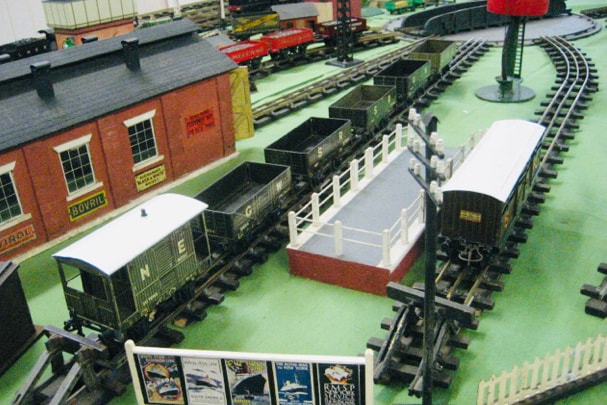 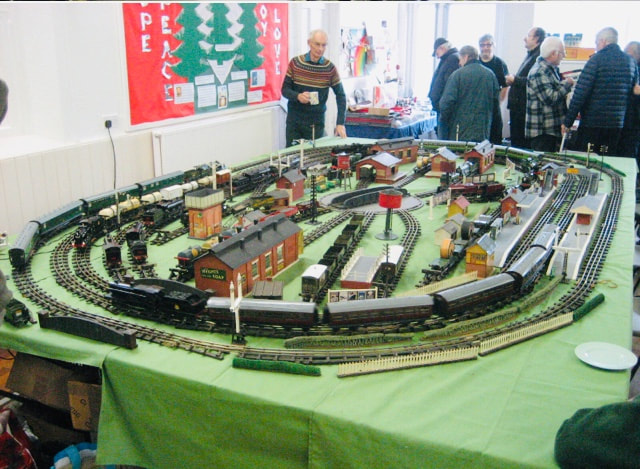 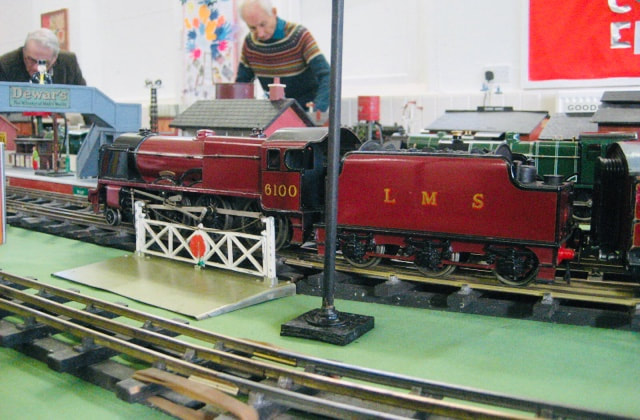 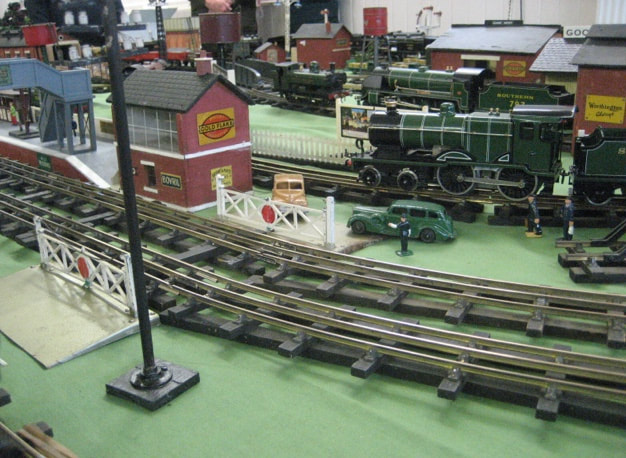 The Vintage Trains Day on July 13th took place in the Bloomfield Road Church Hall, Bromley. 82 people signed in.
This was the much anticipated “big day”, being the last time the complete archive of the Leeds Model Company (Leeds Stedman Trust) was displayed in its entirety by David Peacock, assisted by his neighbour Peter Sapte. Attendees were able to inspect carefully displayed shelves of LMC models and other LMC material and discuss these with David.
The Bassett-Lowke gauge-0 scenic railway with level-centre-3rd track was exhibited by Adrian Capon assisted by Paul Dobson and others. They, together with Peter O’Kane, Bruce Palmer and Graham Lock, had arrived at 7 AM to start the setting up, 3.5 hours ahead of the general opening to the public. Trains ran all day round three tracks with some complex point-work and a large loco depot in the centre. The second gauge-0 railway was the so-called “garage railway” exhibited by David Davenport featuring two loops of Michael Foster track including transition curves.
Traders comprised Colin Ashford, Mark Carne, John Davies, Mike Green, Peter Holmes, Cyril Kennett, Graham Lock, Bruce Palmer, Gordon Stemp, and Tim Walker. Monica and David Embling ran the kitchen with additional washer-uppers from time to time and Graham Lock kept an overall eye on supplies. Keith Wilkin and Robert Fielding were on the door.
Some attendees came from a significant distance away. Colin Nichols came from Cork in Ireland; David Ramsbottom came from the Isle of Man, Richard Hughes came from Leeds. Many others travelled tens of miles. Such is the attraction of the all-day Tappers events.
Colin Ashworth came with help from John Davies. Colin was 100 last March but still exhibits and trades with his railway art and postcards as well as enjoying the trains and company.
A key family in the history of coarse-scale railways was present. Denis Leakey was half of the Leakey-Lee combination who, having worked for Bonds o’ Euston Road, produced the Leakey-Lee electric motor, still regarded as pre-eminent in the field. Horace G Lee died 20 years ago but his son Robert, daughter-in-law Alycia and grandson Charles were all in the Hall for the event. They brought along their Jubilee 5690 locomotive.
Possibly the oldest item for sale was a 1902 Bing gauge-1 live-steam 4-4-0 loco in stripped state from Mark Carne. This was snapped up for restoration. Other live-steam locos seen on the day were Bassett-Lowke Enterprise frame number X140, a Bassett-Lowke Crab mogul frame number 1231 (December 1931) repainted in black and heavily modified and a Spam Can on a Bassett-Lowke mogul chassis (very much “to be completed”). Live-steam is not currently run at Tappers but we have plans!
The day progressed as hoped with a continuous display of trains running and groups of people prowling the hall for sales from the highest quality to the “I-could-fix-that” type and having multifarious conversations.
Sales of the Tappers’ book show no sign of stopping and as of today (8 months and a week since publication) we have sold 369 copies and are about to order a 6th printing. If there are new readers who would like a copy of the book please email me on frankhornby07@aol.com. I can supply by post for £3 + £1.50 postage either in stamps or a cheque. Just before Christmas we shall produce a short supplement detailing the events of the 10th anniversary year which will be given free to Tappers and their friends.
These big events require much meticulous planning over months ahead of time, emailing and telephoning exhibitors and traders, organising the food and the kitchen, requesting volunteer help and then, on the day, setting up many hours before the event opened. Graham Lock shouldered this responsibility almost alone and to him we owe a great debt for the exciting day and the ongoing march of Tappers. Our book lists the upcoming monthly events for 2019 and the Christmas supplement will have the full timetable/diary for 2020.